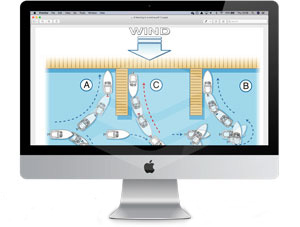 You’ve had a long enjoyable day afloat and all that awaits is getting back alongside the pontoon/your berth in the marina – how difficult can it be? As we all know, too often the ‘coming alongside’ can be the most stressful part of the day with the approach not going as smoothly as you wanted and maybe crossed words between those on board spoiling a great day.

In this article we’ll have a look at some tricks and tips for making your ‘coming alongsides’ smoother and potentially safer. Before we look at the specifics of moving a boat alongside a pontoon then there’s a need to be happy with some of the key aspects of how the boat handles. 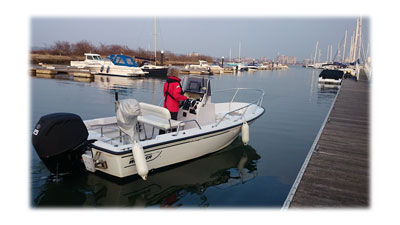 Any time that there’s any wind then understanding how your boat will react is key. Any powerboat/motor cruiser is only ‘happy’ when it is lying side on (‘beam on’) to the wind. Point the bow, or the stern, into the wind and wait a little bit and the boat will rotate to lie beam on to the wind. With boats such as 4 berth family cruisers or longer speedboats like long RIBs the speed at which the boat comes round to lie beam on can be a matter of seconds due to their light bows and relatively heavy sterns.

Likewise if you point the stern at the wind then your boat will rotate to lie beam on. How quickly this happens varies enormously and seems to be a function of the wind strength and the shape of the area at the stern of the boat. Irrespective of how quickly it rotates it will do so and often its surprisingly quick. 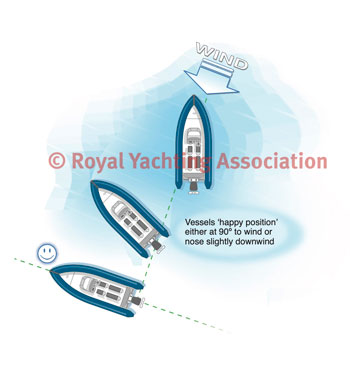 Understanding how quickly your own boat will react in a variety of wind strengths is key if you are to be able predict what it will do in close quarter situations and so react accordingly and be able to fully control its movement. A good idea is to find a clear area of water and then position the vessel bow and then stern to wind and see how things play out.

To be able to manage the movement of the bow or stern then you’ll need to be able to read the conditions and then control the boat being able to steadily hold it bow (or stern) to wind. The method you will use will vary slightly according to the drive system your boat has. With outboard/sterndrive arrangements we’d advocate ‘steer then gear’ – wait for the bow to move to port or starboard then turn the opposite way to full lock and literally for 0.5 sec into/out of forward gear. If you need to add another 0.5 sec etc. With a twin shaftdrive craft then whilst you could use the steering and then the relevant engine i’d tend to keep the wheel centred and just engage the relevant side – if bow going to port then in gear on port to rotate bow to starboard.

To be able to manouvre a boat in a marina you’ll need to be able to turn the boat effectively. The key to doing this well is an expansion of the methods already outlined.

Turn in a confined space

Outboard/sterndrive craft: Come pretty much to a stop (No1), ideally turn into the wind (as getting the wind to help the bow round can make it easier), go in gear and then to neutral. Make sure that you only stay in gear for a second or so. If needs be do it again until you have turned through about 90deg. By only spending second or so in gear rather than much longer you keep the turn tighter space wise else you risk building too much momentum so eating up space. In neutral turn the other way then into and out of gear reverse (No 2) , then in neutral turn again and into forward again to complete the turn (No 3). It’s well worth practicing this move lots as once you have mastered it it’s the key to being really competent in close quarters situations.

Twin shaftdrive craft: Again come pretty much to a stop, as per for outboard craft its generally more effective to put the bow through the wind. How you do the turn here will vary and you can use the engines opposed to each other to create a continuous rotation or nudge each engine into gear with one in forward and one reverse. Whichever way is right at the time be careful not to build too much momentum as we’d alway advocate a controlled, smooth slower turn than one that sees the craft race round and should something go wrong it end up a bit messy. 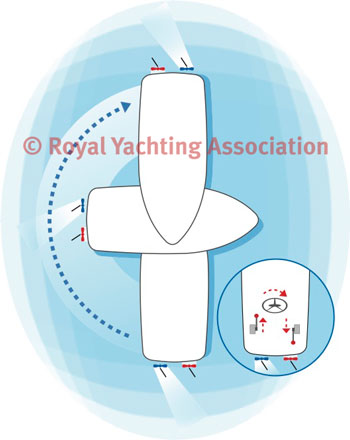 With regards to approaching a pontoon firstly assess the wind and tide (stream) and check you have depth and be aware of other craft. Ideally plan an approach to head into the elements however in a marina you’ll often just have to deal with what you face.

Start a good distance off the pontoon, approach ideally at an angle of roughly 30deg and moderate your forward speed using into/out of gear. Have in mind where you want to come alongside the pontoon and target a point 1m off the pontoon. Be positive towards that point and at the target point turn towards the pontoon quickly then into/out of gear reverse (outboard/sterndrive) or rotate the stern in and arrest forward movement (shaftdrive).

Do it a couple of times and the forward momentum is arrested and you should slide sideways gently onto the berth. Again like any aspect of manouvreing its practice, practice and more practice. Do it 20-30 times and you will move from having to think about it to it being from ‘muscle memory’. 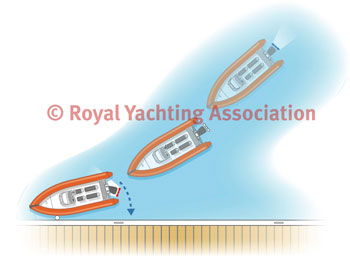 So what about finger berths in a Marina? Let’s take this marina as an example and look through how we deal with the various berths.

Berth A: You are turning up into the wind and momentum is onto the berth, a slow steady approach will work.

Berth B: Approaching from the left the berth is a ‘closed’ face berth. Generally going past, turning then approaching with momentum onto the berth will be the best move – by going past and turning the berth has become ‘open faced’.

Berth C: This is much like berth B but the approach is to reverse in. Powerboats/motor cruisers generally handle very well stern to wind so once in position for the approach a slow steady approach will work well.

Berth D: Again getting past the berth and turning to give momentum onto the berth makes sense. However, the challenge with this berth is the risk of going in too fast with the wind pushing you in. Get lined up and the wind should do the rest.

Berth E: This can be the most challenging berth as the wind will try to push the bow off to the left or right. Position the stern of the craft near the finger and aim to reverse making sure the bow stays pointing into the wind. Be prepared to abort if its going wrong. The sign of a good skipper will sometimes be deciding to approach the berth a different way – perhaps bows first – in challenging conditions. 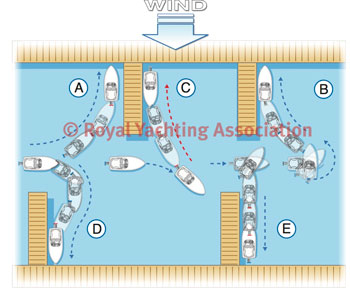 Tip We all want a coming alongside to be millimetre perfect but be realistic. If you get alongside safely and its wasn’t the best one ever then no problem – as one client who had a little plane commented when they had come alongside safely but not prettily – “in our little plane every landing we survive is a good landing!” How true!

As we’ve already said the key is practice so get out there in low wind conditions and go in and out of plenty of berths. Then do it again with a bit more wind. Practice enough and you’ll become the marina pro and really enjoy the challenge close quarter handling presents.

This article was adapted from an article originally written by Powerboat Training UK for Powerboat & RIB Magazine and published in 2019. The article is based on the relevant sections from the RYA Powerboat Handbook.

The RYA Powerboat Handbook is available from the RYA Shop either as a paperback or as an eBook. 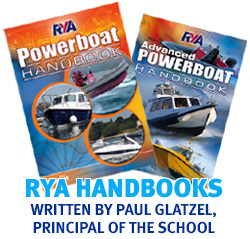